The first two rounds were prepared debates, with the teams enjoying debates on the interesting and novel topic, “That we should farm endangered species”.

This was followed by two rounds of limited preparation debating. In round three the teams debated the classic topic “That we should legalise euthanasia”, and in round four they debated the highly topical motion, “That we should raise the drinking age”.

The teams were given 30 minutes to prepare for the final, on the topic “That teachers should be paid based on their performance”. 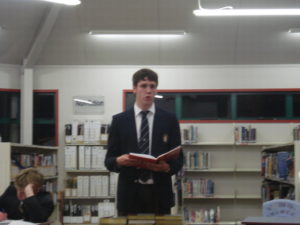 Speaker in the Grand Final

After a lively debate, Palmerston North Boys’ High A were declared the winners by a unanimous panel of adjudicators, winning the Sir Michael Hardie Boys’ Cup.

The following prizes were also awarded:

We wish the CNI Team all the best for the National Finals in August.