The 2010 Russell McVeagh Hawke’s Bay Regional Debating Championships were held over the weekend of 24/25 April, once again at Lindisfarne College. This year Napier Boys’ High School were the victors, winning the final in a unanimous decision to return the Bioethics Council trophy to Napier after a two-year absence.

This year saw 13 teams from ten schools competing for the Bioethics trophy, surpassing 2009 as the largest tournament in memory. The adjudicators were particularly impressed this year with the quality and depth of the debating they saw over the weekend, and feel this bodes well for the future of Hawkes’ Bay debating.

As usual, the tournament started off on Saturday afternoon with the teams debating both sides of a prepared topic over the first two rounds – this year the moot being contended was that ‘the West should withdraw military from Afghanistan’. The teams then moved on to the ‘limited preparation’ rounds, were they were afforded only half an hour to prepare for each debate. The limited preparation rounds spanned Saturday evening and Sunday morning, with topics debating ranging from performance pay for teachers to government funding for the arts.

After the rounds, the top four teams progressed to the semi-finals – this year the top four teams after the rounds (in order from first to fourth) were Napier Girls’ High School, Karamu High, Napier Boys’ High School and Hastings Girls’ High School. Of particular note is that Napier Boys’ and Hastings Girls’ ended up on identical points, and with no other useful metric of separation, the convenors were forced to flip a coin to determine the final ordering for the semi-finals!

This meant that Napier Girls’ high faced Hastings Girls’ in the first semi, while Karamu and Napier Boys’ faced off in the other. The topic for the semi-final was ‘that there should be a separate minimum wage for those under 18’ – a touchy topic perhaps for the majority of the attendees! The debates in the semi-final were both of high quality but in the end Hastings Girls’ prevailed over Napier Girls’ in a 2-1 split decision, while Napier Boys’ unanimously defeated Karamu in the other.

This set up Hastings Girls’ and Napier Boys’ for an exciting final on the topic ‘that the Government should protect dying languages’, which was won after an entertaining and spirited debate by Napier Boys’ High School.

Hastings Girls’ in the Final 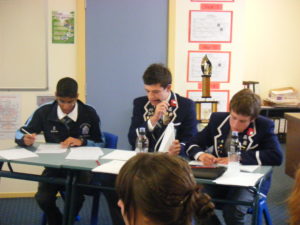 Napier Boys’ in the Final 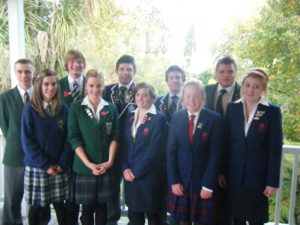 Thanks in particular to Ian Findlay and Lindisfarne for once again being excellent hosts and providing us with the venues necessary to conduct the tournament, even in the midst of their year 13 Ball. Without helpful people like Ian tournaments like this simply wouldn’t be able to function, so it goes without saying that we are all very grateful for the work he puts in every year.