On a wet and windy Sunday 10 May six teams from around the Northland region gathered at Kerikeri High School to compete in the 2009 Russell McVeagh Northland Regional Schools Debating Championship. The teams debated three limited preparation rounds throughout the day, followed by a final in the evening.

After the preliminary rounds two teams narrowly broke to the final: Whangarei Boys’ High School and Kerikeri High School. They debated the motion “This House would allow minority groups to form breakaway states” in a heated final showdown.

Ultimately though, the adjudication panel, chaired by NZSDC President Christopher Bishop, was unanimous in awarding the debate to Kerikeri High School, who were negating. 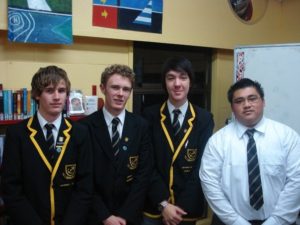