On the 30th and 31st of May fourteen teams from twelve schools braved some of the worst weather the South Island has seen in years to compete in the two day competition held at Otago Boys’ High School.

Rounds one and two were on the prepared topic that “teachers should be paid on the basis of their performance”, then on the Saturday afternoon teams debated whether or not “voting should be made compulsory”. On a slightly drier Sunday morning teams took part in the last round: “That this House would impose harsher penalties on celebrities than ordinary citizens”.

Progressing to the final were defending champions Otago Boys’ High School and Bayfield High School, who debated that “we should allow individuals to sell their organs”. Ultimately Bayfield High School took out the debate, winning the Otago University Debating Society Cup, with a unanimous panel of adjudicators. 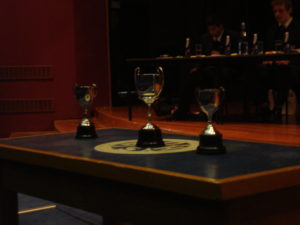 This year we had two new cups donated by Mr Quentin Barry, a debating stalwart, from Otago Boys’ High School, one for best speaker and one for most promising speaker (see above). The winners of prizes at the tournament were: 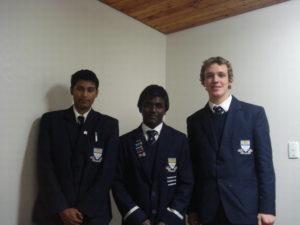